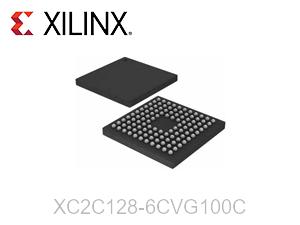 Images are for reference only.

Do you want to buy more and get a better price for XC2C128-6CVG100C? Please fill in the short form below:

The XC2C128-6CVG100C device is designed for both high performance and low power applications. This lends power savings to high-end communication equipment and high speed to battery operated devices. Due to the low power stand-by and dynamic operation, overall system reliability is improved

This XC2C128-6CVG100C device consists of eight Function Blocks inter-connected by a low power Advanced Interconnect Matrix (AIM). The AIM feeds 40 true and complement inputs to each Function Block. The Function Blocks consist of a 40 by 56 P-term PLA and 16 macrocells which contain numerous configuration bits that allow for combinational or registered modes of operation.

Additionally, these registers can be globally reset or preset and configured as a D or T flip-flop or as a D latch. There are also multiple clock signals, both global and local product term types, configured on a per macrocell basis. Output pin configurations include slew rate limit, bus hold, pull-up, open drain and programmable grounds. A Schmitt-trigger input is available on a per input pin basis. In addition to storing macrocell output states, the macrocell registers may be configured as direct input registers to store signals directly from input pins.

A DualEDGE flip-flop feature is also available on a per macrocell basis. This feature allows high performance synchronous operation based on lower frequency clocking to help reduce the total power consumption of the device.

Circuitry has also been included to divide one externally supplied global clock (GCK2) by eight different selections. This yields divide by even and odd clock frequencies.

DataGATE is a method to selectively disable inputs of the CPLD that are not of interest during certain points in time.

By mapping a signal to the DataGATE function, lower power can be achieved due to reduction in signal switching.

Another feature that eases voltage translation is I/O banking. Two I/O banks are available on the XC2C128-6CVG100C device that permit easy interfacing to 3.3V, 2.5V, 1.8V, and 1.5V devices.

Other Authorized Distributors (Fpgakey will provide Competitive price from all franchised resource.)