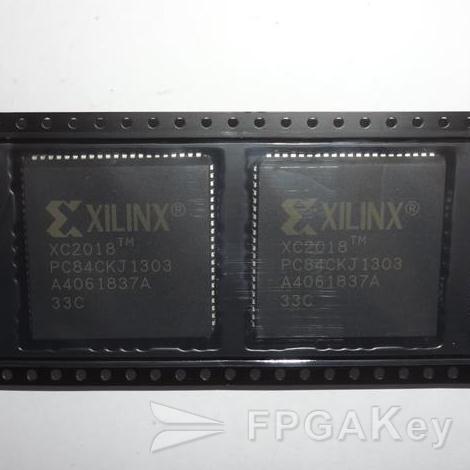 The XC2000 family operates with a nominal 5.0 V supply.
The XC2000L family operates with nominal 3.3 V supply.
The LCA logic functions and interconnections are determined by data stored in internal static-memory cells. On-chip logic provides for automatic loading of configuration data at power-up. The program data can reside in an EEPROM, EPROM or ROM on the circuit board or on a floppy disk or hard disk. The program can be loaded in a number of modes to accommodate various system requirements.
Architecture

The general structure of a Logic Cell Array is shown in Figure 1. The elements of the array include three catego-
ries of user programmable elements:I/O Blocks(IOBs), Configurable Logic Blocks (CLBs) and Programmable Interconnections. The I/OBs provide an interface between the logic array and the device package pins. The CLBs perform user-specified logic functions, and the interconnect resources are programmed to form networks that carry logic signals among the blocks.
LCA configuration is established through a distributed array of memory cells. The XACT development system generates the program used to configure the Logic CellArray which includes logic to implement automatic con-
figuration.
Configuratlon Memory

The configuration of the Logic Cell Array is established by programming memory cells which determine the logic functions and interconnections. The memory loading process is independent of the user logic functions.