CLB (Configurable Logic Block) is a product composed of input and output modules and programmable interconnection bus.  Configurable logic block is the basic logic unit in FPGA. Each CLB contains a configurable switch matrix. This matrix consists of 4 or 6 inputs and some selection circuits (multiplexer) Etc.) and triggers. In Xilinx's FPGA devices, CLB consists of multiple (generally 4 or 2) identical slices and additional logic. 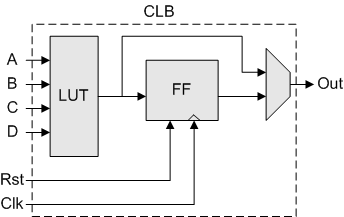 The CLB contains a configurable switch matrix. This matrix consists of a selection circuit (multiplexer), flip-flop and 4 or 6 inputs. In FPGA devices of Xilinx, CLB consists of multiple (generally 4 or 2) identical slices and additional logic. Each CLB module can not only be used to implement combinational logic and sequential logic, but also can be configured as distributed RAM and distributed ROM.

· Input/Output Blocks (IOBs) control the flow of data between the I/O pins and the internal logic of the device. Each IOB supports bidirectional data flow plus 3-state operation. Supports a variety of signal standards, including four high-performance differential standards. Double Data-Rate (DDR) registers are included.

3. The memory block supports a dual-port block with a data storage form of 18000 bits