D flip-flop is an information storage device with memory function and two stable states. It is the most basic logic unit that constitutes a variety of sequential circuits, and it is also an important unit circuit in digital logic circuits. 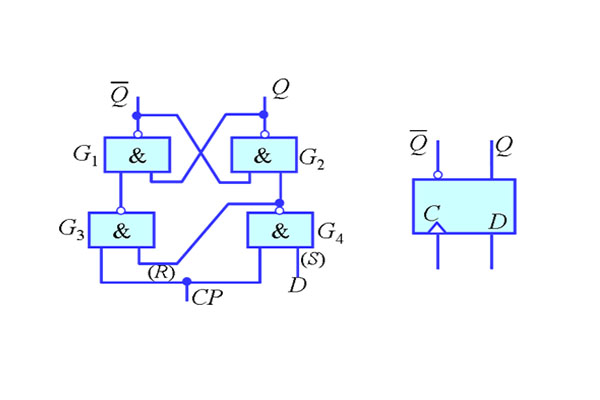 D flip-flop is an information storage device with memory function and two stable states. It is the most basic logic unit that constitutes a variety of sequential circuits, and it is also an important unit circuit in digital logic circuits.

Therefore, D flip-flops are widely used in digital systems and computers. The flip-flop has two stable states, namely "0" and "1", which can be flipped from one stable state to another under the action of a certain external signal.

D flip-flops are composed of integrated flip-flops and gate circuits. There are two trigger modes: level trigger and edge trigger. The former can be triggered when CP (clock pulse)=1, and the latter is mostly triggered on the leading edge of CP (positive transition 0→1).

The D flip-flop consists of 4 NAND gates, among which G1 and G2 constitute the basic RS flip-flop. When level-triggered master-slave triggers work, the input signal must be added before the positive edge. If there is an interference signal at the input during the CP high level, then it is possible to make the state of the flip-flop wrong. The edge trigger allows the input signal to be added immediately before the CP trigger edge. In this way, the time that the input terminal is disturbed is greatly shortened, and the possibility of being disturbed is reduced. Edge D flip-flops are also called sustain-blocking edge D flip-flops. The edge D flip-flop can be formed by connecting two D flip-flops in series, but the CP of the first D flip-flop needs to be reversed with a NOT gate.

SD and RD are connected to the input terminals of the basic RS flip-flop. They are the preset and clear terminals respectively, and are active at low level. When SD=1 and RD=0 (the non-zero value of SD and the non-zero value of RD are 1, that is, the level value input from the outside in the two control ports, the reason is that the low level is effective), regardless of the input terminal D In each state, Q=0, Q not=1, that is, the flip-flop is set to 0; when SD=0 and RD=1 (SD is not 1, RD is not 0), Q=1, Q is not = 0, the flip-flop is set to 1, SD and RD are usually called directly set to 1 and set to 0. We assume that they have all added high level, which does not affect the operation of the circuit.

The working process is as follows:

In order to achieve edge triggering, it should be ensured that the output state of gate G5 remains unchanged during CP=1 and is not affected by the state change of the D terminal. For this reason, in the case of D=0, when the rising edge of CP arrives, it is necessary to wait for the low level output by the gate G3 to return to the input terminal of the gate G5 before the low level of the D terminal is allowed to change. Therefore, the hold time of the input low-level signal is tHL≥tpd. In the case of D=1, since the output of G4 will block G3 after the rising edge of CP arrives, the input signal is not required to remain unchanged, so the holding time of the input high level signal tHH=0.

Calculated from the arrival of the CP rising edge, the output delay time tPHL from high to low and tPLH from low to high are respectively: tPHL=3tpdt PLH=2tpd.

In order to ensure that the synchronous RS flip-flop composed of gates G1～G4 can flip reliably, the duration of CP high level should be greater than tPHL, so the width of the high level of the clock signal tWH should be greater than tPHL. In order to ensure that the new output levels of gates G5 and G6 are stably established before the next CP rising edge arrives, the duration of CP low level should not be less than the sum of the transmission delay time of gate G4 and tset, that is, the clock signal is low. The flat width tWL≥tset+tpd.

In the actual integrated flip-flop, the transmission time of each gate is different, and different forms of simplification have been made, so the results discussed above are just some qualitative physical concepts. The real parameters are determined by experiments.

The set-up time constraint is related to the clock cycle. When the system cannot work under a high-frequency clock, reducing the clock frequency can make the system complete its work. The hold time is a parameter that has nothing to do with the clock cycle. If the design is unreasonable and the place and route tool cannot deploy a high-quality clock tree, then no matter how the clock frequency is adjusted, the requirement cannot be met. Only major changes to the designed system It may work normally, resulting in a greatly reduced design efficiency. Therefore, a reasonable design system timing is the key to improving design quality. In programmable devices, the skew of the clock tree can hardly be considered, so the hold time is usually satisfactory.