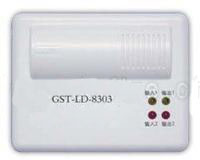 During a fire alarm, the alarm controller activates the external control devices that need to be linked through the output module, such as smoke exhaust valves, air supply valves, fire shutter doors, fans, alarm bells, etc., and can accept the actions of the equipment to answer.

The GST-LD-8301 input/output module is a bus-based control interface that can be used to complete control of dual-action equipment such as two-step fire-proof rolling shutter doors, water pumps, and smoke exhaust fans. It is mainly used for the position control of fire shutter doors, which can be controlled from the upper position to the middle position, and can also be controlled from the middle position to the lower position. The module can also be used as two independent GST-LD-8301 input/output modules.

The GST-LD-8303 input/output module has two coded addresses. The two coded addresses are continuous. The maximum code is 242. It can receive commands for two different actions from the controller. It has two different control outputs and two different confirmations. The function to input the answer signal. The input signal required by this module is a normally open switch signal. Once the switch signal is activated, GST-LD-8303 sends this switch signal to the controller through the linkage bus. The linkage controller generates an alarm and displays the address number of the action device. When the module itself fails, the controller will also generate an alarm and display the module number. This module has two pairs of normally open and normally closed contacts and two sets of active outputs. The input and output have a line detection function.