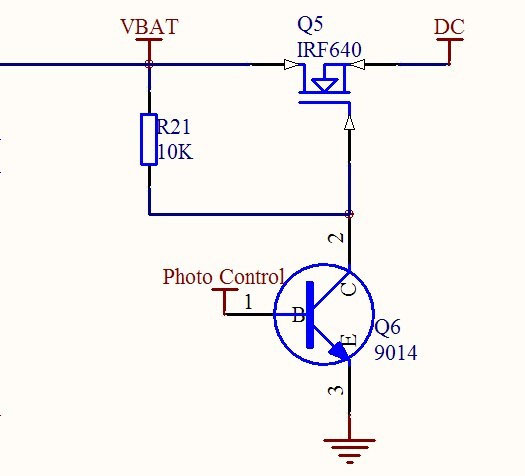 On a P-type silicon substrate with a low doping concentration (providing a large number of movable holes), two N+ regions with high doping concentration are produced (the N+ region has a large number of electron sources that provide free electrons for current flow), And lead two electrodes with aluminum metal, as drain D and source S respectively. Then the semiconductor surface is covered with a thin insulating layer of silicon dioxide (SiO2), and an aluminum electrode (usually polysilicon) is installed on the insulating layer between the drain and the source as the gate G. An electrode B is also drawn on the substrate, which constitutes an N-channel enhancement type MOS tube. The source and substrate of the MOS tube are usually connected together (most of the tubes are connected before leaving the factory).

The control effect of vGS on iD and channel

As can be seen from Figure 1(a), there are two back-to-back PN junctions between the drain d and source s of the enhanced MOS tube. When the gate-source voltage vGS=0, even if the drain-source voltage vDS is added, and regardless of the polarity of vDS, there is always a PN junction in the reverse bias state, and there is no conductive channel between the drain-source, So the drain current iD≈0 at this time.

The gate-source voltage at the beginning of the channel formation is called the turn-on voltage, which is expressed by VT.

The N-channel MOS tube cannot form a conductive channel when vGS<VT, and the tube is in the off state. Only when vGS≥VT, there is a channel formation. This kind of MOS tube that can form a conductive channel only when vGS≥VT is called an enhanced MOS tube. After the channel is formed, a drain current is generated by adding a forward voltage vDS between the drain and the source.

The impact of vDS on iD

When vGS>VT is a certain value, the effect of the drain-source voltage vDS on the conductive channel and current iD is similar to the junction field effect transistor.

With the increase of vDS, the channel near the drain becomes thinner and thinner. When vDS is increased to make VGD=vGS-vDS=VT (or vDS=vGS-VT), the channel appears pre-pinched off at the end of the drain , As shown in Figure 2(b). Continue to increase vDS, the pinch breakpoint will move toward the source, as shown in Figure 2(c). Since almost all the increased part of vDS falls in the pinch-off region, iD hardly increases with the increase of vDS. The tube enters the saturation region, and iD is almost determined by vGS.

PMOS is used in the reverse protection circuit, and the use of diodes is not required. The voltage drop is smaller and the dissipation is less. Don't look at a parasitic forward diode, but it is completely useless. When the circuit is normally energized, GATE is connected to the zero potential far below the D terminal, and this PMOS is completely turned on. When the power is reversed, the GATE potential is much higher than the S terminal, and the PMOS is completely cut off.