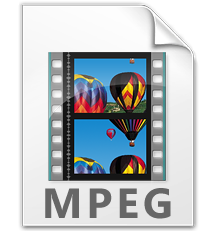 There are five main MPEG standards, MPEG-1, MPEG-2, MPEG-4, MPEG-7 and MPEG-21. The expert group was established in 1988 and is specifically responsible for establishing video and audio standards for CDs, while the members are technical experts in the fields of video, audio and systems. After that, they successfully separated the recording of sound and video from the traditional analog method, established the ISO/IEC11172 compression coding standard, and formulated the MPEG-format, so that the audiovisual transmission has entered the digital era. Therefore, everyone currently refers to the MPEG-X version by ISO (International

Organization for Standardization) Compression standards for video, audio, and data developed and published.

The MPEG-1 standard was officially published in 1992. The standard number is ISO/IEC11172, and its title is "Code rate is about 1.5Mb/s for the encoding of digital storage media moving images and their accompanying sounds." MPEG-1 mainly solves the problem of multimedia storage. Its successful formulation has made MPEG-1 products represented by VCD and MP3 quickly popularized worldwide.

--Layer 3: complex coding, used for the transmission of high-quality sound on the Internet, such as MP3 music compression 10 times

Features: Like MPEG-1 audio layer 1-Layer 3 (Layer 3), 2 channels. MP3 is a hybrid compression technology based on the advantages of MUSICAM and ASPEC. Under the technical conditions at that time, the complexity of MP3 appeared to be relatively high, and the encoding was not conducive to real-time. However, due to the high level of MP3 under low bit rate conditions The sound quality makes it the darling of soft decompression and network broadcasting.

Advantages: high compression ratio, suitable for spreading on the Internet

Disadvantages: when MP3 is 128KBitrate and below, there will be obvious high frequency loss

The MPEG-2 coding standard hopes to include coding standards in various fields of digital TV and image communication. MPEG-2 is divided into five profiles according to the difference in compression ratio, and each profile is divided into four image formats according to the difference in image clarity , Or level. There are 20 combinations in five levels and four levels, but some combinations are unlikely to appear in practical applications. The more commonly used are 11 combinations (the items marked with "√" in the table below). These 11 combinations are used in different occasions, such as MP@ML.

Features: MPEG-2 sound compression coding uses the same codec as MPEG-1 sound. Layer 1, layer 2 and layer 3 have the same structure, but it can support 5.1 channel and 7.1 channel surround sound.

Royalty method: collect one by one

MPEG-4 began research in July 1995, and was approved as an official standard by ISO/IEC in November 1998. The official standard number is ISO/IEC14496, which not only targets video and audio coding at a certain bit rate, but also pays more attention to multimedia systems. Interactivity and flexibility. This standard is mainly used in video telephony, video e-mail, etc., the transmission rate is relatively low, between 4800-6400bits/s, the resolution is 176*144. MPEG-4 uses a very narrow bandwidth, through frame reconstruction technology, data compression, in order to obtain the best image quality with the least data. The high compression ratio and high image restoration quality of MPEG-4 can be used to convert MPEG-2 video files in DVD into smaller video files. After such processing, the video quality of the image does not drop much but the volume can be reduced by several times. It is easy to use the CD-ROM to save the programs on the DVD. In addition, MPEG-4 is also very useful in home video recording and network live video playback.

MPEG-7 (its origin is 1+2+4=7, because there is no MPEG-3, MPEG-5, MPEG-6) began to study in October 1996. To be precise, MPEG-7 is not a compression coding method. Its formal name is'Multimedia Content Description Interface. Its purpose is to generate a standard for describing multimedia content. This standard will provide a certain interpretation of the meaning of information. The degree of freedom can be transferred to the device and computer program, or retrieved by the device or computer program. MPEG-7 is not aimed at a specific application, but at the image elements standardized by MPEG-7. These elements will support as many applications as possible. The starting point for establishing the MPEG-7 standard is to rely on numerous parameters to classify images and sounds, and to query their databases, just like we query text databases today. Can be applied to digital libraries, such as image cataloging, music dictionaries, etc.; multimedia query services, such as telephone directory, etc.; broadcast media selection, such as radio and TV channel selection; multimedia editing, such as personalized electronic news services, media creation Wait.

MPEG proposed the concept of "multimedia framework" at the MPEG conference in October 1999. In December of the same year, the MPEG conference determined that the official name of MPEG-21 was "multimedia framework" or "digital audiovisual framework". The integrated technology that supports coordination is aimed at managing multimedia commerce. The purpose is to understand how to combine different technologies and standards, what new standards are needed, and how to complete the integration of different standards.

The creators of MPEG originally planned to develop four versions: MPEG1-MPEG4 to adapt to different bandwidth and digital image quality requirements. Since MPEG3 was abandoned, there are only three versions of MPEG: MPEG-1, MPEG-2, and MPEG-4. In general, MPEG is superior to other compression/decompression schemes in three aspects. First of all, since it was researched and formulated as an international standard at the beginning, MPEG has good compatibility. Secondly, MPEG can provide better compression ratio than other algorithms, up to 200:1. More importantly, while MPEG provides a high compression ratio, the loss of data is very small.

MPEG-1 was established in 1992 and is designed for industrial-grade standards. It can be applied to devices with different bandwidths, such as CD-ROM, Video-CD, and CD-i. It can compress the image of SIF standard resolution (352X240 for NTSC system; 352X288 for PAL system), the transmission rate is 1.5Mbits/sec, play 30 frames per second, with CD (refer to laser turntable) sound quality, quality The level is basically equivalent to VHS. The encoding rate of MPEG is up to 4-5Mbits/sec, but with the increase of the rate, the quality of the decoded image is reduced.

MPEG-1 is also used for video transmission on digital telephone networks, such as Asymmetric Digital Subscriber Line (ADSL), Video on Demand (VOD), and educational networks. At the same time, MPEG-1 can also be used as a recording medium or to transmit audio on the Internet.

MPEG-2 was established in 1994, the design goal is the image quality of advanced industrial standards

And higher transfer rates. The transmission rate that MPEG-2 can provide is between 3-10Mbits/sec, and its resolution under the NTSC system can reach 720X486. MPEG-2 can also provide and can provide broadcast-level video and CD-level sound quality. MPEG-2 audio coding can provide left and right and two surround channels, as well as an emphasis bass channel, and up to 7 audio channels (DVD can have 8 languages dubbing reasons). Due to the ingenious handling of MPEG-2 in design, most MPEG-2 decoders can also play MPEG-1 format data, such as VCD.

At the same time, due to the excellent performance of MPEG-2, it can already be applied to HDTV, so that MPEG-3 originally intended for HDTV was abandoned before it was born. (MPEG-3 requires a transmission rate between 20Mbits/sec-40Mbits/sec, but this will slightly distort the picture). In addition to being the designated standard for DVD, MPEG-2 can also be used to provide broadcast-grade digital video for broadcast, cable TV networks, cable networks, and direct broadcast satellite (DirectBroadcastSatellite).

Another feature of MPEG-2 is that it can provide a wider range to change the compression ratio to adapt to different picture quality, storage capacity, and bandwidth requirements.

For the end user, due to the limitations of existing TV resolutions, the high-definition picture quality (such as DVD picture) brought by MPEG-2 is not obvious on the TV, but its audio characteristics (such as increased bass, more Soundtracks, etc.) are more noticeable.

The experts of the MPEG expert group are working hard for the formulation of MPEG-4. The MPEG-4 standard is mainly used in videophones, video emails, and electronic news. The transmission rate requirements are relatively low, between 4800-64000bits/sec, with a resolution of 176X144.

MPEG-4 uses a very narrow bandwidth to compress and transmit data through frame reconstruction techniques in order to obtain the best image quality with the least amount of data.

Compared with MPEG-1 and MPEG-2, MPEG-4 is more suitable for interactive AV services and remote monitoring. MPEG-4 is the first dynamic image standard that enables you to change from passive to active (no longer just watching, allowing you to join, that is, interactive); another feature of it is its comprehensiveness; from the source , MPEG-4 attempts to blend natural objects with man-made objects (in the sense of visual effects). The design goal of MPEG-4 also has wider adaptability and scalability.

The traditional boundaries between telecommunications, computers and the TV/film industry are extremely blurred. Content that originally belonged to one field in history has now penetrated into the other two fields. Video, sound and communication have entered the computer; interactivity has entered the television; video and interactivity have entered the field of remote communications. It looks like a gathering, but it is not. These three industries study audiovisual applications from different technical perspectives.

In today’s world, three main trends should be followed:

1. The trend towards wireless communication;

2. The trend toward interactive computer applications;

3. The growing trend of comprehensive application of audiovisual data.

For the intersection between industries that are traditionally distinguished, these three trends should be considered comprehensively; the current standards and the standards being produced do not adequately address these new needs. The focus of MPEG-4 is to solve these needs, that is, to integrate common applications in three industries to provide interactive audio-video coding, high compression ratio, and universal access capabilities. In order to adopt the advantages of rapidly developing related technologies, the MPEG-4 standard will ensure a high degree of flexibility and scalability.

Content-based interactivity includes the ability of people to interact with meaningful objects in audiovisual images. Currently, this interaction is limited to computer graphics, that is, artificially synthesized content. For new interactive audiovisual applications, it is extremely important to be able to provide interaction with natural, artificial, and natural/artificial mixed audiovisual objects.

Universal access capability means that access to useful audiovisual data can be performed in a wide range of storage and transmission media. Given the rapid rise of mobile communications, access to such applications via wireless networks is particularly important.

A high degree of flexibility and extensibility is ensured by the syntax description language, which is called ‘MPEG-4 Syntax Description Language’ (MSDL). MSDL will be introduced below.

Current audiovisual standards are designed for the reproduction of natural content captured from cameras and microphones. Due to the mutual penetration of the above three fields, the application of artificial content is constantly growing. Therefore, it is obvious that the demand is a mode suitable for both natural and artificial objects, which can be used to generate a single audiovisual sequence.