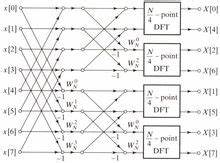 A finite-length sequence can be discretized into a finite-length sequence through the discrete Fourier transform (DFT). But its calculation is too large, it is difficult to deal with the problem in real time, so it leads to the fast Fourier transform (FFT). In 1965, Cooley and Tukey proposed a fast algorithm to calculate the discrete Fourier transform (DFT), the DFT The amount of calculation is reduced by several orders of magnitude. Since then, research on the Fast Fourier Transform (FFT) algorithm has been continuously deepened, and the emerging discipline of digital signal processing has also developed rapidly with the emergence and development of FFT. According to the different methods of sequence decomposition and selection, a variety of FFT algorithms are generated. The basic algorithms are radix 2DIT and radix 2DIF. FFT also has important applications in inverse discrete Fourier transform, linear convolution, and linear correlation. 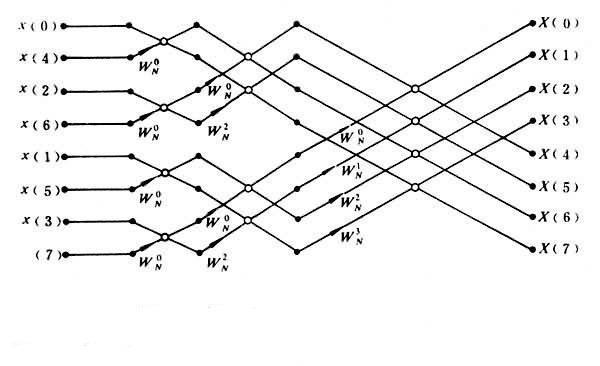 The basic idea of FFT is to sequentially decompose the original N-point sequence into a series of short sequences. Make full use of the symmetric and periodic nature of the exponential factor in the DFT calculation formula, and then find the corresponding DFT of these short sequences and combine them appropriately to achieve the purpose of eliminating duplicate calculations, reducing multiplication operations and simplifying the structure. Since then, fast algorithms such as high basis and split basis have been developed based on this idea. With the rapid development of digital technology, in 1976, the Vinograder Fourier Transform Algorithm (WFTA) based on number theory and polynomial theory appeared. ) And prime factor Fourier transform algorithm. Their common feature is that when N is a prime number, the DFT calculation can be converted into a circular convolution, thereby further reducing the number of multiplications and increasing the speed.

Among these algorithms, the base 2 algorithm is most commonly used. Usually according to the sequence decomposition process in the time domain or frequency domain, it can be divided into two types: one is the time extraction FFT algorithm (DIT), the N point DFT input sequence x (n), in the time domain is decomposed into 2 A sequence of N/2 points and x1(n) and x2(n). The former is extracted from the original sequence according to even sequence numbers, while the latter is extracted according to odd sequence numbers. DIT is such a fast algorithm composed of regular and odd order decomposition.

The fast method to calculate discrete Fourier transform includes FFT algorithm based on time extraction and FFT algorithm based on frequency extraction. The former sorts the time domain signal sequence according to even and odd, and the latter sorts the frequency domain signal sequence according to even and odd. They both rely on two characteristics: one is periodicity; the other is symmetry, where the symbol * represents its conjugation. In this way, the calculation of the discrete Fourier transform can be divided into several steps, and the calculation efficiency is greatly improved.

(3) Where (4a) and (4b) can be seen from this, formula (4) is two discrete Fourier transforms containing only N/2 points, G(k) includes only the sequence of even-numbered points in the original signal sequence, H(k) Then only include its odd point sequence. Although k=0, 1, 2, ..., N-1, the periods of G(k) and H(k) are both N/2, and their values are repeated in N/2 periods.

② The FFT algorithm is iterated in stages, and the calculation formula can be written as

⑹The input signal of N sampling points has N original data x0(n). After the first stage operation, new N data x1(n) are obtained, and then through the second stage iterative operation, another N data x2 are obtained (n), and so on, until the final result x(k)=xM(k)=X(k) In the iterative calculation step by step, the output data of each butterfly operation is stored in the unit that originally stored the input data In the implementation of the so-called "in-place calculation", this can save a lot of registers for storing intermediate data.

④ The input data sequence x(n) needs to be rearranged into x(0), x⑷, x⑵, x⑹, x⑴, x⑸, x⑶, x⑺, which is the reverse order number obtained by inverting the code position of the binary number, for example, N=8 The binary number of the median "1" is "001", and its code point is inverted to "100", which is the decimal number "4".

In the case of N=2, divide the N point input sequence x(n) into two halves

The length of the time series x1(n)±x2(n) is N/2, so the discrete Fourier transform of N points can be written as

The amount of calculation is exactly the same as the time extraction algorithm, that is, only multiplication operations and Nlog2N addition (subtraction) operations are required. Figure 3 shows the signal flow diagram of the discrete Fourier transform with N=8=2 points. It can be seen from the figure that it performs in-place calculation in three levels of iteration, the input data is stored in natural order, the coefficients used are also in natural order, and the final result is stored in reverse binary order.

The obvious advantage of small calculation amount makes FFT widely used in the field of signal processing technology, and real-time processing of signals can be realized in combination with high-speed hardware. For example, the analysis and synthesis of voice signals, the multiplexing and conversion of fully digital time division and frequency division (TDM/FDM) in communication systems, filtering and correlation analysis of signals in the frequency domain, through radar, sonar , Spectrum analysis of vibration signals to improve the resolution of target search and tracking, etc., all need to use FFT. It can be said that the emergence of FFT has played an important role in the development of digital signal processing.