Digital filter is an algorithm or device composed of digital multiplier, adder and delay unit. The function of the digital filter is to process the digital code of the input discrete signal in order to achieve the purpose of changing the signal spectrum. 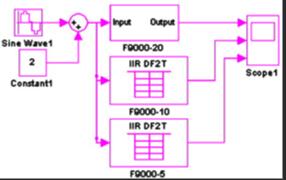 If you use a general-purpose computer, you can write a program at any time to perform signal processing, but the processing speed is slower. If a dedicated computer chip is used, it is an integrated circuit made according to an arithmetic method. The signal can be processed by connecting signals. The processing speed is fast, but the function is not easy to change. If a programmable computer chip is used, then what function the machine can have with whatever program is loaded. This kind of programmable chip has many advantages, it is the first choice of modern electronic products. If the analog signal is processed, an analog-to-digital converter and a digital-to-analog converter need to be added.

The specific steps for the design of IIR digital filters are as follows:

The system function of the IIR digital filter can be written as a closed function.

The IIR digital filter uses a recursive structure, that is, a feedback loop on the structure. The operation structure of the IIR filter is usually composed of basic operations such as delay, multiplication, and addition. It can be combined into four types: direct type, positive quasi type, cascade type, and parallel type, all with feedback loops. Due to the rounding process in the operation, the error is continuously accumulated, and sometimes a weak parasitic oscillation is generated.

The phase characteristic of the IIR digital filter is not easy to control. When the phase requirements are high, a phase calibration network needs to be added.

Unlike the design of the FIR filter, the order of the IIR filter design is not specified by the designer, but is based on various filter parameters (cutoff frequency, passband filter, stopband attenuation, etc.) input by the designer, and is controlled by the software. Design the lowest filter order that satisfies these parameters. Different types of IIR filters designed under MATLAB have corresponding functions for order selection.

IIR amplitude-frequency characteristic has high precision, not linear phase, and can be applied to audio signals that are not sensitive to phase information;

The accuracy of the FIR amplitude-frequency characteristic is lower than that of iir, but the linear phase is the time difference between the signals of different frequency components after passing through the FIR filter. This is a very good nature.

In addition, the limited unit response is also conducive to the processing of digital signals, easy to program, and the delay for calculation is also small, which is very important for real-time signal processing.

Device. The relationship between the output y(m,n) and the input x(m,n) of a linear, time-invariant two-dimensional digital filter is described by a two-variable linear constant coefficient difference equation: (see Figure 4)

The corresponding transfer function is shown in Figure 5, where a b is the filter coefficient, and Z[y(m,n)] and Z[x(m,n)] are the two-dimensional Z transforms of the output and input signal sequences, respectively.