EPROM was invented by Israeli engineer Dov Frohman. It is a computer storage chip that can retain data after power off-that is, non-volatile (non-volatile). It is a group of floating-gate transistors, which are individually programmed by an electronic device that provides a higher voltage than is commonly used in electronic circuits. Once the programming is completed, the EPROM can only be erased with strong ultraviolet radiation. Through the transparent window where the silicon chip can be seen on the top of the package, it is easy to identify the EPROM. This window is also used for ultraviolet erasure. The glass window of EPROM can be erased by direct sunlight for a period of time. 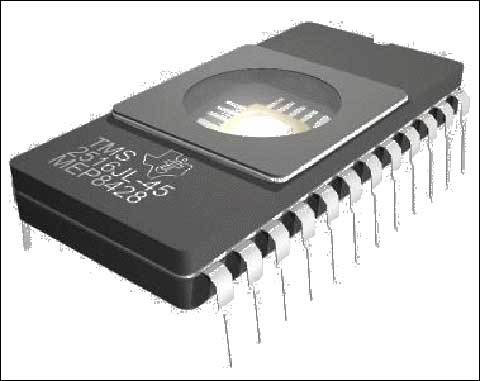 EPROM is an erasable ROM memory that can be reprogrammed after erasing. Before writing, the contents must be cleared by irradiating the transparent window on its IC card with ultraviolet light. This type of chip is relatively easy to identify. The package contains a "quartz glass window". The "quartz glass window" of a programmed EPROM chip is generally covered with black adhesive paper to prevent direct sunlight.

The EPROM chip can be repeatedly erased and written, which solves the disadvantage that the PROM chip can only be written once. The EPROM chip has a very obvious feature. On the front ceramic package, a glass window is opened. Through this window, the integrated circuit inside can be seen, and the internal chip can be erased by ultraviolet radiation through the hole. EPROM eraser is needed to complete the chip erase operation. The writing of data in EPROM requires a dedicated programmer, and a certain programming voltage must be added when writing content to the chip (VPP=12~24V, depending on the chip model). The EPROM model starts with 27. For example, 27C020 (8*256K) is an EPROM chip with a capacity of 2M Bits. After writing the data, the EPROM chip must also seal the window with opaque stickers or tape to avoid damage to the data by the surrounding ultraviolet radiation. When the EPROM chip is in a blank state (after being erased with ultraviolet light), the data of each internal storage unit is 1 (high level) Note: 0 is low level.

A piece of EPROM after programming can keep its data for about 10 to 20 years and can be read unlimitedly. The erasure window must be kept covered to prevent accidental erasure by sunlight. The BIOS chip of the old computer is generally EPROM, and the erasing window is often covered by the label printed with the name, version and copyright notice of the BIOS publisher. EPROM has been replaced by EEPROM (electrically erasable read-only register).

Some microcontrollers produced before the emergence of flash memory use EPROM to store the version of the program to facilitate program development; such as the use of one-time programmable devices, it will cause serious waste during debugging.

EPROM is a programmable device. The mainstream product is a double-layer gate (two-layer poly) structure. The main structure is shown in the figure below. 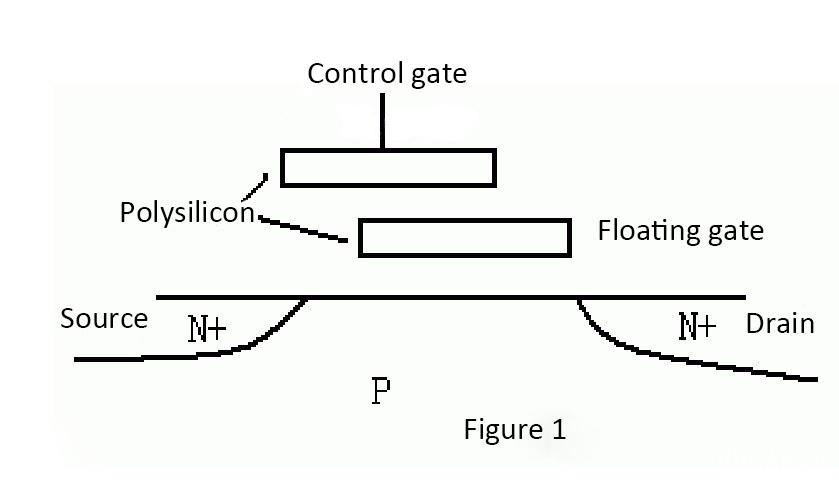 Due to the induction, it will attract electrons and open the channel.

If electrons are injected into the floating gate, that is, increase the threshold voltage of the tube,

The channel is closed. In this way, the switching function is achieved.

This is the writing process of EPROM. When the high voltage is applied to the drain, the electron flows from the source to the drain channel to fully open. Under the action of high pressure, the pulling force of the electron is strengthened, and the energy makes the temperature of the electron rise extremely, becoming a hot electron ( hot electrON). This kind of electrons are almost not scattered by the vibration of atoms. When the high voltage is applied by the control gate, the hot electrons can jump over the barrier of SiO2 and be injected into the floating gate.

The writing process of EEPROM is to use the tunnel effect, that is, electrons with energy less than the energy barrier can cross the barrier to reach the other side.

Quantum mechanics believes that when the physical size is equivalent to the free path of an electron, the electron will exhibit volatility. Here, it means that the object should be small enough.

As far as the pn junction is concerned, when the impurity concentration of p and n reaches a certain level, and there is very little space charge, electrons will migrate to the conduction band due to the tunnel effect.

When electrons reach a higher conduction band, they can move freely between atoms. This movement is electric current.

The EEPROM writing process, as shown in Figure 3, according to the tunneling effect, the SiO2 surrounding the floating gate must be extremely thin to reduce the barrier.

The source and drain are grounded and in a conducting state. A high voltage above the threshold voltage is applied to the control gate to reduce the effect of the electric field and attract electrons to cross.

The difference between EEROM and EPROM

EPROM is Erasable Programmable Read Only Memory, which means "erasable programmable read-only memory" in Chinese. It is a rewritable memory chip, and its contents will not be lost when power is off. In other words, it is non-volatile. It is programmed by EPROM programmer, which can provide higher voltage than normal working voltage to program EPROM. Once programmed, the EPROM can only be erased under strong ultraviolet radiation. For erasing, the EPROM ceramic package has a small quartz window. This quartz window is usually covered with an opaque adhesive tape. When erasing, the adhesive tape is peeled off and then placed under strong ultraviolet light for about 20 minutes. . The main ICs are 27XX series and 27CXX series.

EEPROM is electrically  erasable,  programmable,  read-only, is an electrically erasable programmable read-only memory, and its contents will not be lost when power is lost. Under normal circumstances, EEPROM and EPROM are read-only. When you need to write, add a high voltage to the specified pin to write or erase, and the speed of erasing is extremely fast! Generally, EEPROM chips are divided into two types: serial EEPROM and parallel EEPROM. The data input/output of serial EEPROM during reading and writing is carried out through interface methods such as 2-wire, 3-wire, 4-wire, or SPI bus. Data input/output is performed via the parallel bus. The main IC has 28XX series.