PROM is the abbreviation of Programmable Read-Only Memory. It is a computer storage memory chip. It allows the use of hardware called PROM programmer to write data into the device. It can only be modified once by the user. Read only memory (ROM). 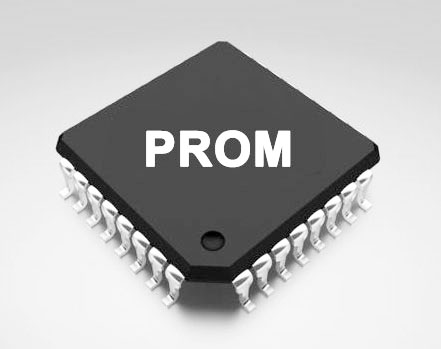 PROM only allows writing once, so it is also called "One Time Progarmming ROM" (OTP-ROM). When the PROM is shipped from the factory, the stored content is all 1, and the user can write some of the units to data 0 as needed (some PROMs are all 0 when shipped from the factory, then the user can write some of the units to 1) , In order to achieve its "programming" purpose. The typical product of PROM is the "bipolar fuse structure". If we want to rewrite some cells, we can apply sufficient current to these cells and maintain them for a certain period of time. The original fuse can be blown. Reached the effect of rewriting certain bits. Another type of classic PROM is a PROM that uses a “Schottky diode”.

At the time of shipment, the diode is in the reverse cut-off state, or the reverse voltage is applied to the “Schottky diode” by a large current method, causing it to Permanent breakdown is sufficient.

The PROM chip is blank when it is new, but it is preset into the binary 1. The 1Mbit ROM chip used by the computer has 1 million (actually 1048576 bits) bit positions, and each bit holds 1 binary 1. A blank PROM can be programmed, ie written to it. Need a special machine equipment called programmer, namely ROM programmer, or called ROM burner to write.

We call the ROM programming process "burning", which is an appropriate technical description of this process. Each binary "1" can be regarded as a complete and non-destructive fuse. The operating voltage of most chips is +5V. When programming the PROM, a higher voltage should be added to each address of the chip. Usually +12V, the fuse is blown at the corresponding position of the higher voltage, and any given 1 is changed to 0. Although 1 can be changed to 0. But it must be clearly recognized that this process is irreversible, that is to say It is not possible to change 0 to 1. For this reason, PROM chips are usually called one-time programmable (OTP) chips. They can only do one-time programming and cannot be erased again. Most PROM is very cheap, if you need to change the program in the PROM, you can discard it and use a new chip.

The time required to program the PROM varies from a few seconds to a few minutes, depending on the size of the chip and how the programming device is used.

The invention process of PROM

The programmable read-only memory was invented by Zhou Wenjun in 1956. Zhou Wenjun worked at the US company Bosch Emma in Garton, New York. This invention was proposed by the US Air Force to improve the flexibility and security of Air Force computers and Atlas E/F-band missiles.