CPLD (Complex Programmable Logic Device) is a device developed from PAL and GAL devices. It is relatively large in scale and complex in structure, and belongs to the scope of large-scale integrated circuits. It is a kind of digital integrated circuit that users construct logic functions according to their own needs. The basic design method is to use the integrated development software platform to generate corresponding target files with schematic diagrams, hardware description languages, etc., and transfer the code to the target chip through the download cable ("in-system" programming) to realize the designed digital system . 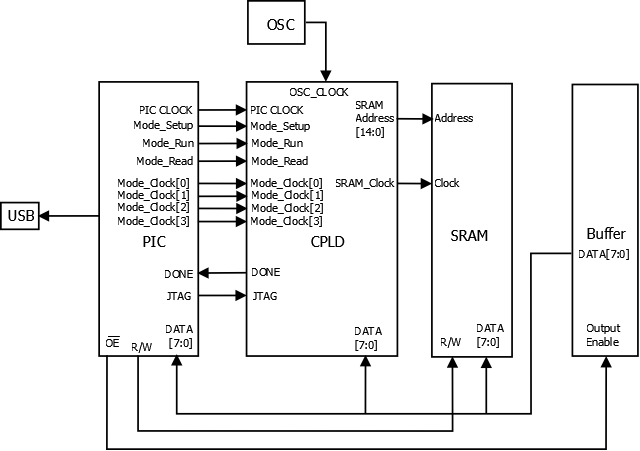 CPLD is mainly composed of programmable logic macro cells (MC, Macro Cell) around the center of the programmable interconnect matrix unit. Among them, the MC structure is more complicated, and has a complex I/O unit interconnection structure, and the user can generate a specific circuit structure according to needs to complete certain functions. Since the CPLD uses fixed-length metal wires to interconnect the logic blocks, the designed logic circuit has time predictability, avoiding the disadvantage of incomplete prediction of the timing of the segmented interconnect structure.

In the 1970s, the earliest programmable logic device, PLD, was born. The output structure is a programmable logic macro unit, because its hardware structure design can be completed by software (equivalent to manually designing the local indoor structure after the house is built), so its design has strong flexibility than pure hardware digital circuits , But their overly simple structure also makes them only able to implement smaller-scale circuits. In order to make up for the defect that PLD can only design small-scale circuits, in the mid-1980s, a complex programmable logic device, CPLD, was introduced. This application has penetrated into the network, instrumentation, automotive electronics, CNC machine tools, aerospace measurement and control equipment, etc.

It has the characteristics of flexible programming, high integration, short design and development cycle, wide application range, advanced development tools, low design and manufacturing costs, low hardware experience requirements for designers, standard products without testing, strong confidentiality, and popular prices. Large-scale circuit design can be realized, so it is widely used in product prototype design and product production (generally below 10,000 pieces). CPLD devices can be used in almost all applications where small and medium-sized general-purpose digital integrated circuits are used. CPLD devices have become an indispensable part of electronic products, and its design and application have become a necessary skill for electronic engineers.

CPLD is a kind of digital integrated circuit that users construct logic functions according to their own needs. The basic design method is to use the integrated development software platform to generate corresponding target files using schematics, hardware description languages, etc., and transfer the code to the target chip through the download cable ("in-system" programming) to realize the designed digital system .

Take the answering machine as an example to talk about its design (decoration) process, that is, the design process of the chip. Most of CPLD's work is done on the computer. Open the integrated development software (Altera Max pluxII) → draw the schematic diagram, write the hardware description language (VHDL, Verilog) → compile → give the input excitation signal of the logic circuit, perform simulation, check whether the logic output result is correct → perform pin input 3. Output lock (64 input pins and output pins of 7128 can be set as required) → generate code → transfer and store the code in the CPLD chip through the download cable. The pins of the 7128 chip have been led out. Connect the digital tube, the answer switch, the indicator light, and the buzzer to the chip board through the wire, and test the power. When the answer switch is pressed, the corresponding indicator should be on. In the future, after the referee gives points, see if the digital display shows that the result is correct. If a problem is found, the schematic or hardware description language can be revised to improve the design. After the design is completed, such as mass production, you can directly copy other CPLD chips, that is, write the code. If you want to design other chips, such as traffic light design, you need to redraw the schematic diagram or write a hardware description language, repeat the above process to complete the design. This modified design is equivalent to renovating the house, which can be carried out tens of thousands of times for CPLD.

After decades of development, many companies have developed CPLD programmable logic devices. The more typical ones are the products of three authoritative companies in the world, Altera, Lattice and Xilinx. Here are the commonly used chips: Altera EPM7128S  (PLCC84)

The identification and classification of FPGA and CPLD are mainly based on their structural characteristics and working principles. The usual classification method is:

The devices that form logical behavior in the form of a table lookup method are called FPGAs, such as Xilinx's SPARTAN series, Altera's FLEX10K or ACEX1K series.

Although FPGA and CPLD are programmable ASIC devices and have many common characteristics, due to the differences in structure of CPLD and FPGA, they have their own characteristics:

④ FPGA has higher integration than CPLD and has more complicated wiring structure and logic implementation.

⑤ CPLD is more convenient to use than FPGA. CPLD programming uses E2PROM or FASTFLASH technology, no external memory chip is needed, and it is easy to use. The FPGA programming information needs to be stored in an external memory, the method of use is complex.

⑨ In general, the power consumption of CPLD is greater than that of FPGA, and the higher the integration, the more obvious.

CPLD can use ladder diagram to edit logic functions, and can also be written in hardware description language. Commonly used languages are Verilog HDL and VHDL.