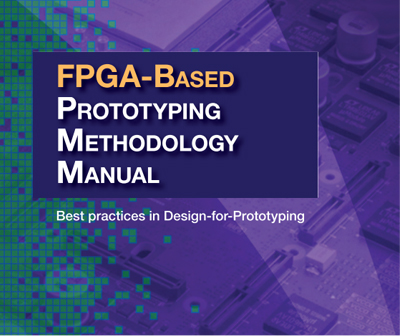 FPGAs provide a platform for SoC development and verification unlike any other and their greatest value is in their unique ability to provide a fast and accurate model of the SoC in order to allow pre-silicon validation of the embedded software. Like all leading-edge developers, we at STMicroelectronics use a wide range of different tools and platforms during SoC design and verification. There is a prototyping community within ST, including several teams belonging to different divisions and addressing different design environments with a variety of prototyping approaches – real-time prototyping, commercial solutions, and custom machines. We use FPGA-based prototypes because they are often more than ten times faster than emulators and this allows us to respond to the needs for a fast platform for interactive testing of new SoC software by a large number of developers on different sites.

Embedded software has become the dominant part of the effort in modern SoC design. We need to start earlier in our project just to allow enough time for the completion of the software and this means running it on the SoC “pre-silicon.” It is very clear to me that the main benefit from FPGA-based prototyping is precisely for the software teams. Prototyping is the hardware team’s answer to the software team’s problems. It is simply the only type of technology that offers realism to pre-silicon software developers by, for example, giving instantaneous response from JTAG debuggers, allowing operating system booting in near real-time and allowing real-time interfaces to the system peripherals. I could go on but you can read for yourselves the benefits that others have obtained from using FPGA-based prototyping in the introductory chapters of this book.

This book discusses different possible board and system architectures and I believe that learning from previously available architectures is mandatory for everybody building high-speed prototypes. The make versus buy decision criteria, both technical and commercial, are also to be found in this book reinforcing in my mind my belief that the only reason to build a custom platform in-house is when a high number of replicated platforms need to be built. How many is a “high number?” There is help in these pages for the reader to work this out for themselves, but in general only dozens of copies of the board will allow users to get the return on the engineering cost invested for the board’s development. Certainly, for any single usage, buying a commercial solution is much more economical! The obstacles to FPGA-based prototyping that I mentioned in my opening make it daunting for some. However, there are also a number of steps in overcoming those three laws of prototyping that can be taken by us all. These are outlined in this comprehensive book and if you read this before embarking on your project, especially the Design-for-Prototyping guidelines, then you are more likely to succeed.
The book ends with a discussion of linking prototypes to simulation tools via transaction-level interfaces and leads into a glimpse of future directions. I believe that we will see more integration of FPGA-based prototyping with ESL modeling to create transaction-based platforms which will extend the benefit to software developers from before RTL right through FPGA-based prototyping to first silicon. This book, and its companion web-based forum, will attract managers’ attention to the importance of prototyping and I expect it will be a great support to the prototyping community!