The Quad-SPI flash controller is part of an input/output peripheral (IOP) located within the PS that is used to access multi-bit serial flash devices for high throughput and low pin count applications.

The controller operates in one of three modes.

In I/O mode, software interacts closely with the flash device protocol, using the four TXD registers to write flash commands and data to the controller, and software reads the RXD register containing the data received from the flash device.

What are the features

The Quad-SPI flash controller is part of the IOP and connects to the external SPI flash via MIO, as shown in Figure. The controller supports one or two memories. 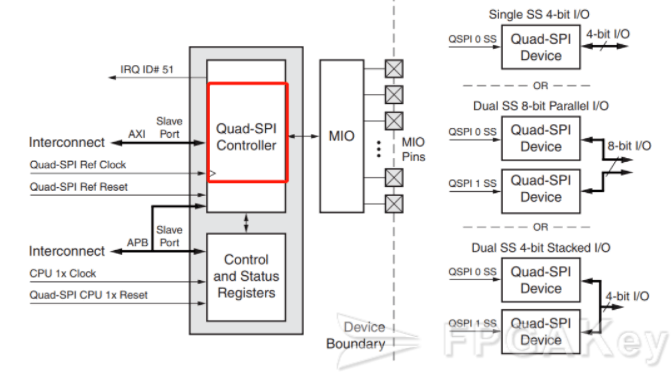 When using a single device, the address mapping for direct memory reads starts at FC00_0000 and goes up to FCFF_FFFF (16 MB).

For 4-bit stacked I/O configurations, devices can have different capacities, but must have the same protocol.

If two devices of different sizes are used, Xilinx recommends using a 128 Mb device at the lower address, in which mode

If the size of the first device is less than 16 MB, then there is a memory space hole between the two devices.

The block diagram is shown in the figure. 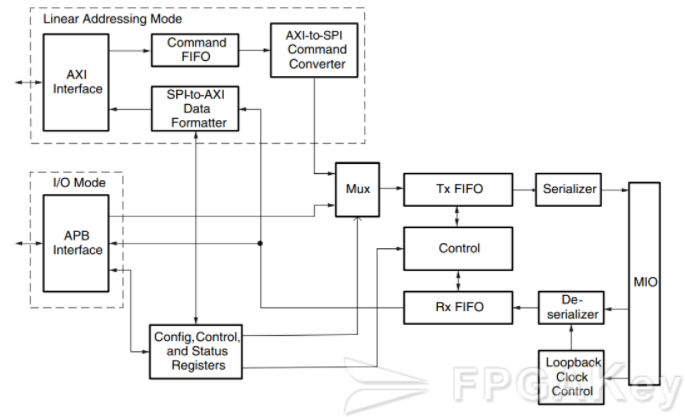