Introduction to the DMA Controller

The controller can be configured with up to eight DMA channels, each corresponding to a thread running on the DMA engine processor. When a DMA thread executes a load or store instruction, the DMA engine pushes the memory request to the associated read or write queue.

The DMA controller uses these queues to buffer AXI read/write transactions, and the controller contains a multi-channel FIFO (MFIFO) for storing data during DMA transfers.

Program code running on the DMA engine processor treats the MFIFO as containing a set of parallel FIFOs of variable depth for DMA read and write transactions, and the program code must manage the MFIFO so that the total depth of all DMA FIFOs does not exceed 1024 bytes of MFIFO.

DMAC is capable of moving large amounts of data without processor intervention, and the source and target memory can be located anywhere in the system (PS or PL), and DMAC's memory mapping includes DDR, OCM, linearly addressed Quad-SPI read memory, SMC memory, and PL peripherals or connected to the M_GP_AXI interface. Memory.

6.128 (64-bit) word MFIFO for buffering data written or read by the controller during transfers 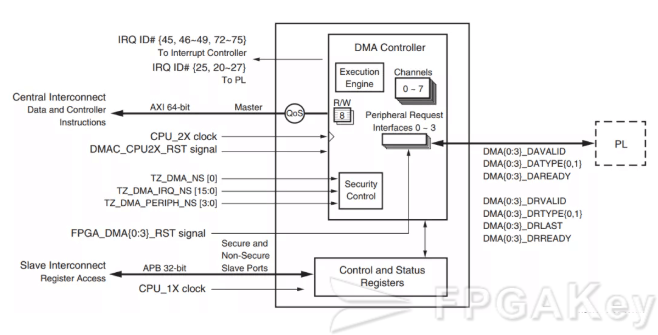 DMA (Direct Memory Access) is an important feature of all modern computers, allowing hardware devices of different speeds to communicate without relying on the CPU's heavy interrupt load, and is widely used.