This website uses cookies. By using this site, you consent to the use of cookies. For more information, please take a look at our Privacy Policy.
Home > FPGA Technology > IP core design > How to implement NVMe SSD interface on Xilinx ZCU102 evaluation kit - FPGA Technology

ZCU102 provides programmable logic functions and can be used in the most advanced applications such as 5G wireless networks, next-generation advanced driver assistance systems (ADAS), and industrial Internet of Things (IIoT) solutions.

In short, for applications that require high-performance, high-reliability external data storage such as NVMe SSD drives, it is necessary to adopt appropriate solutions to make full use of GTH transceivers that support PCI Express® Gen3 interfaces.

An example of an NVMe storage device is shown here. 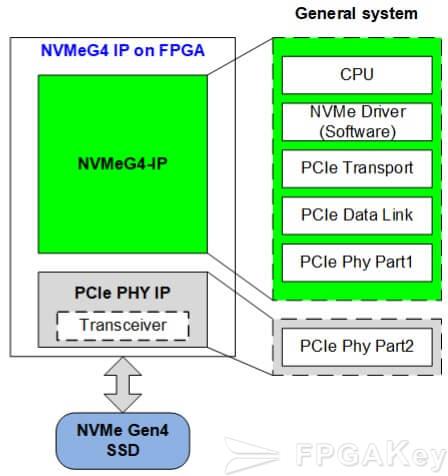 By convention, the NVMe host is realized by using the host processor in conjunction with the PCIe controller to realize data transfer to and from the NVMe SSD. The purpose of implementing the NVMe protocol is for device driver communication with PCIe controller hardware CPU peripherals connected via a higher-speed bus. Both the data buffer and the command queue require external DDR memory to transfer data between the PCIe controller and the SSD.

Because the XCZU9EG-2FFVB1156E FPGA device on ZCU102 does not contain PCIe Gen3 integrated block, traditional implementation methods cannot be used.

In the absence of PCIe integrated block, CPU, and external memory, the NVMe IP core with PCIe Gen3 IP soft-core (NVMeG3-IP) is ideal for accessing NVMe SSD. NVMeG3-IP includes PCIe Gen3 IP soft-core and 256 KB memory. If your application requires a higher-speed performance of NVMe SSD storage, but you use a low-cost FPGA that does not contain PCIe integrated blocks, then this solution is recommended. 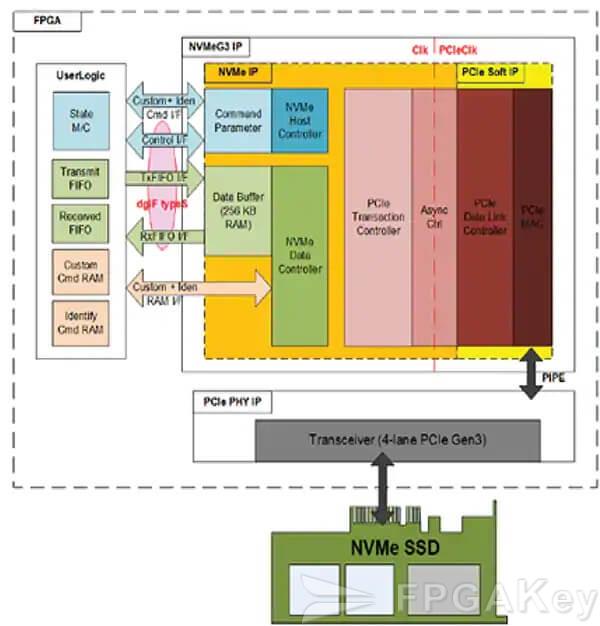 NVMeG3-IP has many features, some of which are listed below:

Design Gateway developed NVMeG3-IP to be able to operate as an NVMe host controller to access NVMe SSD. The user interface and standard features are designed for ease of use, without knowledge of the NVMe protocol. The additional feature of NVMeG3-IP is the built-in PCIe IP soft-core, which can implement certain parts of the data link layer and physical layer of the PCIe protocol through pure logic. Therefore, with the built-in PCIe IP soft-core and Xilinx PCIe PHY IP core, NVMeG3-IP can run on FPGAs without PCIe integrated blocks. Xilinx's PCIe PHY IP is a free IP core available that includes a transceiver and logic equalizer.

NVMeG3-IP supports six NVMe commands, namely identify, close, write, read, SMART, and refresh. 256 KB of BlockRAM is integrated into NVMeG3-IP, which can be used as a data buffer. The system does not require a CPU and external memory.

The FPGA resource usage of the XCZU9EG-2FFVB1156E FPGA device is shown in Table 1 below.

Implementation and performance results of ZCU102

The following figure shows an overview of the reference design based on ZCU102 to demonstrate the operation of NVMeG3-IP. The NVMeG3IPTest module in the demo system includes the following modules: TestGen, LAxi2Reg, CtmRAM, IdenRAM and FIFO. 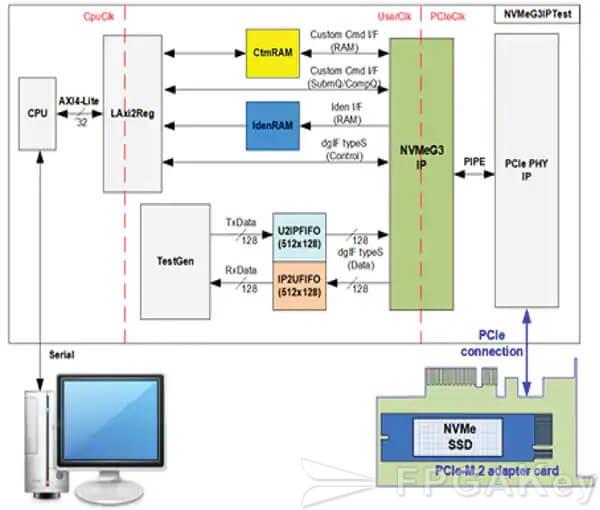 The demonstration system is designed to write/verify data to the NVMe SSD on the ZCU102. The user can control the test operation through the serial console. To connect NVMe SSD and ZCU102, you need to use the AB17-M2FMC adapter board, as in the figure below. 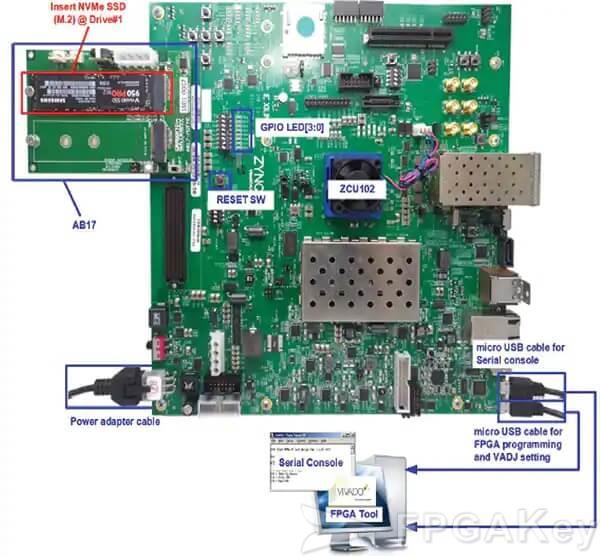 When using a 512 GB Samsung 970 Pro, the sample test results of running the demo system on ZCU102 are shown in the figure below.

The NVMeG3-IP core provides a solution for implementing the NVMe SSD interface on the ZCU102 evaluation kit; it also provides a solution for the Xilinx® Zynq® UltraScale+™ MPSoC device series without PCIe integrated block. The design goal of NVMeG3-IP is to achieve the highest performance of NVMe SSD access with the lowest FPGA resource usage without using the CPU. It is very suitable for high-performance NVMe storage that does not use a CPU. It can use GTH transceivers to implement multiple NVMe SSD interfaces without being limited by the number of PCIe integrated modules contained on the FPGA device.