It is recommended that bank0, bank14, and bank15 have the same VCCO voltage to avoid I/O Transition at the End of Startup (recommended configuration according to the following table) 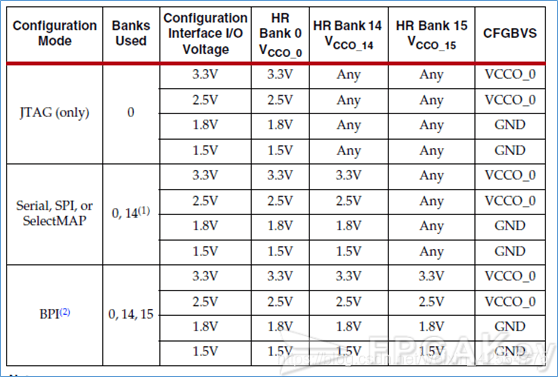 Mode configuration pins, according to the following table to select.

VCCBATT is a battery backup power supply for the FPGA's internal volatile memory, which is used to store the AES decryptor key. If the decryption key in the volatile key store is not required, connect this pin to GND or VCCAUX.

Use the EMCCLK pin to load the program at full speed

Since the CCLK pin has tolerance, you can use the EMCCLK pin, which is a more accurate clock than CCLK. The following steps are required to enable this function.

2. define the EMCCLK target voltage. bank 14 has another pin that defines the IOSTANDARD. The voltage defined on BANK 14 is automatically applied to EMCCLK. use the BITSTREAM.CONFIG.EXTMASTERCCLK_EN property to set the ExMasterCclk_en option in Vivado

The configuration process is decomposed into 8 steps.

The 7 series device requires power to the VCCO_0, VCCAUX, VCCBRAM and VCCINT pins. At power-up, the VCCINT power pin must provide 1.0V or 0.9V (for -2L) power. In JTAG mode, any I / O power supply other than VCCO_0 is not required to power the 7 Series FPGA configuration. VCCO_14, VCCO_15, or both must also be provided when configuration mode using multi-function pins (i.e., Serial, Main BPI, SPI, SelectMAP) is selected. After power-up, the PROGRAM_B pin can be reconfigured by switching it low.

Application: This step can be used to reload the FPGA using the watchdog circuit, or to control the FPGA reload by other devices (DSP, CPLD, etc.).

After the device is powered up, the PROGRAM_B pin is pulsed low, and the configuration memory is sequentially cleared after using the JTAG JPROGRAM command or IPROG command, or during a fallback retry configuration sequence. The block RAM is reset to its initial state and the flip-flop is reinitialized by asserting a Global Set Reset (GSR). During this period, the I / O is placed in the high resistance state by using the global tri-state (GTS) except for a few configuration output pins, which are internally pulled up if PUDC_B is low. INIT_B is driven low internally during initialization and then used for power-up cases after TPOR, while TPL is used for other cases. If the INIT_B pin is held low from the outside, the device will wait during initialization until the pin is released and the TPOR or TPL delay is satisfied.

When the INIT_B pin is high, the device samples the M [2:0] mode pin and starts driving CCLK if it is in master mode. At this point, the device starts sampling the configuration data input pin on the rising edge of the configuration clock. For BPI and SelectMAP modes, the bus width is initially x8, which is reflected in the status register. After the bus width detection sequence, the status register is updated. The mode pins are sampled again only when reconfiguration is performed by re-powering up or down or by setting PROGRAM_B.

After loading the synchronization word and checking the device ID, the configuration data frame is loaded. This process is transparent to most users.

After loading a configuration frame, the bitstream instructs the device to enter the boot sequence. The boot sequence is controlled by an 8-phase (phases 0-7) sequential state machine. The startup paramter performs the tasks listed in the table below. The specific phases of each boot event are user programmable.

The start sequence can be forced to wait for the MMCM to lock or to match the DCI with the appropriate option. These options are typically set to prevent DONE, GTS, and GWE from being set (preventing device operation) until the MMCM locks and/or DCI matches.

The DONE signal is released by the start sequencer on a user-indicated cycle, but the start sequencer does not continue until the DONE pin actually sees a logic high. The DONE pin is an open-drain bidirectional signal. By releasing the DONE pin, the device stops driving the logic low and pulls up on the pin through the internal pull-up resistor. By default, DONE_PIPE is enabled to add registers between the DONE pin and the configuration logic. 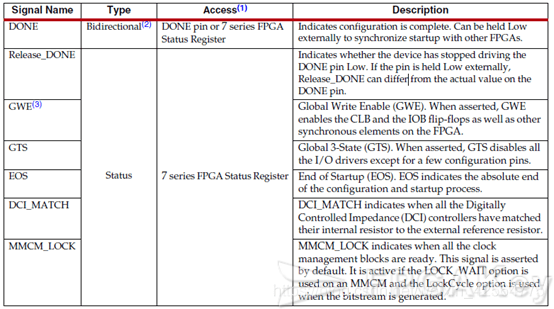 By default, DONE is released in phase 4 of startup and DONE_PIPE is enabled to add an additional delay clock cycle. DONE indicates that configuration is complete and all data has been loaded, but some additional clock cycles need to be applied to ensure that the boot sequence completes correctly to phase 7, the end of boot. DONE is a conservative number of clock cycles required after 24; this will explain the most common use cases. The bitstream options LCK_cycle or Match_cycle will add an undefined number of additional clock cycles.

In the Spartan-7, Artix-7, and Kintex-7 families, if the VCCO of the bank is 1.8V or lower, then there are multi-function configuration pins on the I / O bank and the pins on that bank are low or floating, and then the inputs may have a 0-1-0 transition to interconnect logic during configuration startup. Since this transition occurs after the GWE enables the internal logic, it may affect the internal state of the device after configuration. After EOS (end of boot), the transition occurs a CFGCLK. To avoid this transition, set VCCO_14 and VCCO_15 to 2.5V or 3.3V, or drive the pins externally high (see Table 5-13). Otherwise, the logic should be designed to ignore these affected input signals until at least 200 ns after a CFGCLK following an EOS rising edge. CFGCLK and EOS can be monitored using STARTUPE2.

The burn configuration file includes four types, among which MCS, BIN and HEX files are solidified files, which are directly burned to the external memory of FPGA. 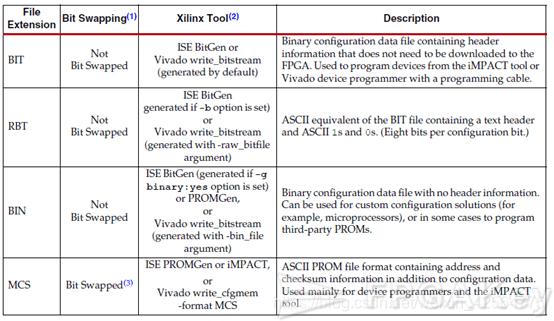 7 series FPGA MultiBoot and backup function supports updating system in the field. Bitstream images can be dynamically upgraded in the field. FPGA MultiBoot function can switch images in real time. When an error is detected during MultiBoot configuration, the FPGA can trigger a fallback function to ensure that a known good design can be loaded into the device

When a fallback occurs, an internally generated pulse resets the entire configuration logic, except for the dedicated MultiBoot logic, the hot boot start address (WBSTAR) and boot status (BOOTSTS) registers. This reset pulse pulls INIT_B and DONE low, clears the configuration memory, and restarts the configuration process from address 0 and drives the revision select (RS) pin to 00. After the reset, the bitstream will overwrite the WBSTAR start address.

Dual-use RS pins are disabled by default. The RS pin is driven low during fallback in BPI or Master SelectMAP mode, but is not driven low during SPI mode. For the initial MultiBoot system, the RS pins are connected to the high address bits of the flash memory and are tied high or low via pull-up or pull-down resistors, respectively. At power-up, the system is directed to the high address space defined by the pull-up resistor and address line connections on the RS. During fallback, the RS pin is driven low and the device is bootstrapped from address space 0. The RS pin should be connected to the system-defined high bit address to allow full bit files to be stored in each memory segment.