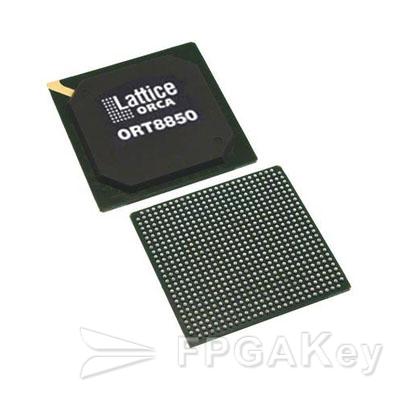 Field Programmable System-on-a-Chip (FPSCs) bring a whole new dimension to programmable logic: Field Programmable Gate Array (FPGA) logic and an embedded system solution on a single device. Lattice has developed a solution for designers who need the many advantages of FPGA-based design implementation, coupled with highspeed serial backplane data transfer. Built on the Series 4 reconfigurable embedded System-on-a-Chip (SoC) architecture, the ORT8850 family is made up of backplane transceivers (SERDES) containing eight channels, each operating at up to 850 Mbits/s (6.8 Gbits/s when all eight channels are used). This is combined with a full-duplex synchronous interface, with built-in Clock and Data Recovery (CDR) in standard-cell logic, along with over 600K usable FPGA system gates (ORT8850H). With the addition of protocol and access logic such as protocol-independent framers, Asynchronous Transfer Mode (ATM) framers, Packet-over-SONET (PoS) interfaces, and framers for HDLC for Internet Protocol (IP), designers can build a configurable interface retaining proven backplane driver/receiver technology. Designers can also use the device to drive high-speed data transfer across buses within a system that are not SONET/SDH based. For example, designers can build a 6.8 Gbits/s PCI-to-PCI half bridge using our PCI soft core.

The ORT8850 family offers a clockless High-Speed Interface for inter-device communication on a board or across a backplane. The built-in clock recovery of the ORT8850 allows for higher system performance, easier-to-design clock domains in a multiboard system, and fewer signals on the backplane. Network designers will benefit from the backplane transceiver as a network termination device. The backplane transceiver offers SONET scrambling/descrambling of data and streamlined SONET framing, pointer moving, and transport overhead handling, plus the programmable logic to terminate the network into proprietary systems. For non-SONET applications, all SONET functionality is hidden from the user and no prior networking knowledge is required.